A Taste of India Outside London 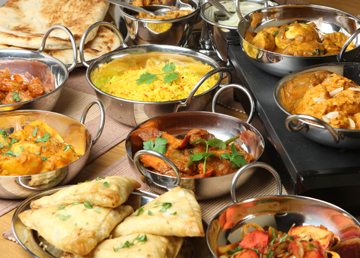 A taste of India outside London

While London is known for its plethora of Indian food, regions outside London are not to far away. So, whether it is traveling to Manchester or Edinburgh, we bring to you the Indian restaurants outside London which give you a taste of home.

Hansa’s opened in Leeds in 1986 serving authentic Gujarati food in Leeds. Serving only vegetarian cuisine, the dishes are freshly cooked to order by an all-female team. Specialities include Hansa’s Kenyan Special, which sees cassava and sweetcorn paired with a coconut sauce, while moving onto mains there’s a wide range of expertly spiced vegetable and dals. When it comes to desserts do try the traditional kulfi or their vegan desserts such as lapsi – bulgur wheat cooked in vegetable ghee with cinnamon, fennel, sultanas and cardamom.

Among the specialities at this Brighton restaurant is their thali, which is available in vegetarian, meat and prawn variations. Another must try is their Hyderabadi Murgh, a rich chicken dish delicately flavoured with nutmeg, cinnamon and coconut, and Malvani mutton, infused with cardamom, coriander, cumin and black pepper.

Based in Birmingham and Manchester their mix-and-match ‘bolli bites’ of marinated chicken and spicy mushrooms are a must order but their party menu provides your choice of kebab and curry to be mopped up with deliciously flaky whole wheat paratha and other assorted breads.

Based in various locations in Brighton, the original on Ship Street is known for its quirky take on South Indian street food, from thali and sharing platters to hybrid specials such as masala-battered fish and chips. Their newer branch at Kemptown village has an open kitchen and dining area that allows guests to interact with the chef.

Located on the site of an old beauty spa in the heart of Edinburgh, Tuk Tuk has become something of an Indian institution since it opened its doors back in 2013. Most of the tapas-sized dishes are on offer for around £5 with highlights including Bengali fishcakes consisting of whole chunks of white fillet encased in a crisp, conker-coloured spicy batter.

The street-food and craft-beer specialist has a regularly rotating array of keg and cask options, best imbibed with a selection of the bar snacks, from crispy and colourful savoury rice puffs to nuts, peas and lentils tossed in the homemade spice mix. The menu keeps things simple, with an all-vegetarian offering of good-value small plates, making it impossible not to sample a selection.

These Newcastle restaurants take their name from the dabbawalas, delivery workers who are essential to a smooth-running lunch service in Mumbai. The main highlight of this restaurant is its so-called ‘tapas’ menu of street. Among its signatures is the Bombay Bomb, a mix of puffed rice and gram-flour sev tossed in onion and pomegranate and served with tamarind and mint sauces.

With outposts in Manchester and Cheadle, this popular Indian street-food restaurant comes with a good pedigree, having been set up by chefs who formerly worked at the prestigious Zaika and Gymkhana in London. An amalgamation of regional dishes from across India, it places authentic flavours and healthy ingredients at the fore. The cornerstone of the wide-ranging menu is its South Indian tiffin dishes – light bites eaten for breakfast, lunch and dinner ­ from dosas filled with chilli chutney and potato masala to idly, a savoury steamed dumpling, here packed with rice and lentils or crushed and sauteed with onions and the restaurant’s signature spice mix. The Indian Tiffin Room is particularly good for vegans, with a dedicated menu that’s nearly as extensive –and just as creative – as the main offering.

Dawn and Alan Sperring, the wife and husband team behind this popular restaurant, took inspiration from their travels to India – as well as a stint at the high-end Cinnamon Club in London – to set up The Chilli Pickle in Brighton. The varied menu offers fresh and modern takes on the classics, from tandoori lamb served with vibrant beetroot raita and mint chilli pickle, to dosas heaped with vegetable curry and coconut chutney.

This mini-chain of five restaurants scattered around Bristol started out in 1999 as a street food truck serving the hungry and mud-weary revellers at Glastonbury. It was the first Indian restaurant group to be awarded the highest rating by the Sustainable Restaurant Association, focusing on locally sourced meat and fish and seasonal fruit and vegetables.

Nisha Katona gave up her 20-year career as a barrister to pursue her obsession with curry, setting up Mowgli in Liverpool and following with a further outpost in Manchester a year later. She aims to dispel the myth that Indian cuisine is unhealthy with menus packed full of fresh and vibrant flavours, plus its fair share of vegan and gluten-free options too.