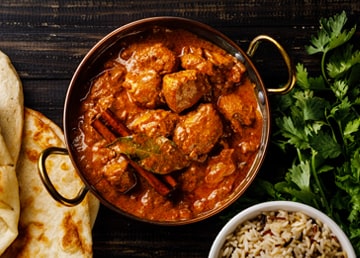 They say you have this dish once, and you are bound to have it again and again. The true national British dish, Chicken tikka masala is popular among several communities in Great Britain.

Since British people like their meat served in a gravy, the masala sauce was an addition to the original recipe. Chunks of chicken are marinated in yogurt, baked in the tandoor oven and added to a delicious, spicy masala sauce.

The dish’s origins are unknown and globally debated. Some believe it was derived from butter chicken, a mouth-watering dish from North India. Others would like to give credit to a Bangladeshi Chef from Glasgow, Scotland. They believe that sometime in the 1970s, to please a British customer, he added a portion of tomato soup to his chicken tikka.

Whatever may be the origins, we can safely say that Chicken Tikka Masala is one of the best examples of global fusion cuisine.

People who love this dish call it the ultimate spicy comfort food. Though a South Asian dish, it is a perfect symbol of how Britain absorbs and adapts different cultures and influences.

Chicken tikka masala is plated and served in wide variety of restaurants across Great Britain. The best places to try it in London would be at Dishoom, Punjab, Kati Roll Company, Amaya and Bombay Bustle.

To add more flavour to your meal, you could complement this dish with other Indian specialties like butter garlic naan, jeera rice, saag bhaji and tarka daal.

If you would like to try the recipe at home, visit –