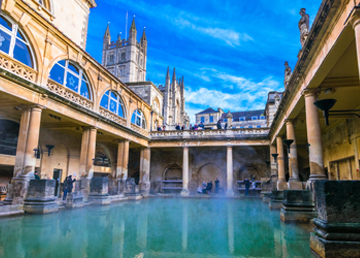 Hidden beneath the city of Bath, lies one of the finest religious spas of the ancient world – The Roman Baths.

Constructed around 70AD – the Roman Baths is one of the most well-preserved Roman remains in the world, where 1,170,000 litres of steaming spring water filled the site every day. The site consists of extensive ruins and an interactive museum filled with many treasures and visual anecdotes which will transport you back to the Roman times.

The pavements are still maintained in the same style as they were 2,000 years ago along with the ancient chambers, changing rooms and plunge pools.

Taking you back in time, post the exploration of the site one can take a sip of the spa water in the Pump Room, which contains 43 minerals.

From mid-June to the end of August, the Roman Baths are open until 10pm, illuminated by torchlight. The flickering torches cast shadows on the ancient pavements and create a beautifully romantic and magical atmosphere.

The opening times vary through the year:

The Roman Baths are situated in the centre of Bath – 100 miles west of London and 10 miles east of Bristol.

The National Express operates a regular bus service from London Victoria, Heathrow and Gatwick airports to Bath bus station, which is a five minutes’ walk from the Roman Baths.

Bath is an excellent city to visit by rail. The station is called Bath Spa. There are frequent high-speed connections to London Paddington. For a slower and cheaper service try London Waterloo.

If you are driving down you would be going via the M5 and M4 approaching Bath from the north and using the Lansdown Park and Ride, marked Park and Ride North.