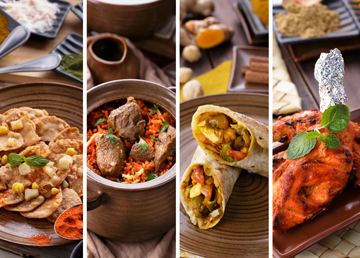 Birmingham is known for being the inventor of Balti, but when it comes to Indian cuisine there are many more diverse offerings other than your regular Balti restaurants.

If you are ever up in the Midlands, here are the five restaurants you should try out:

Lasan: Based in Jewellery Quarter, this restaurant is known for winning Gordon Ramsay’s The F Word in 2010. One of the best fine dining Indian restaurants in the Midlands, it is one of the showpieces of the city’s rich Indian food.

Raja Monkey: Based in Hall Green, Raja Monkey indulges you in a range of thalis and street food, with their artfully aged interiors, which evoke the essence of India’s dhabas. With food served in steel thalis and canteen like vibe, this one will surely take you down memory lane.

Asha’s Restaurant: Headed by famous singer Asha Bhosle, this restaurant is situated on the stylish Newhall Street, serving up contemporary Indian dishes. The space is large, yet it has an intimate feeling to the setup. From their tandoori kebabs to the curries, their menu is full of that authentic Indian cuisine.

Itihaas: In the midst of the historic Jewellery Quarter and Colmore Business District, Itihaas was once the hub of the corporate professionals, and now a popular Indian restaurant amongst the Brummie locals. The menu features some historic items like AyurvedJhinga and dishes hailing from Kerala.

Indian Brewery: This one is not just for the Indian street food lovers but those who enjoy a pint of craft beer too. Indian Brewery is nestled beneath the railway arches near Snow Hill train station. The rustic interior of the restaurant channels the industrial strength of Birmingham as a city, and its food is just as strong, too.