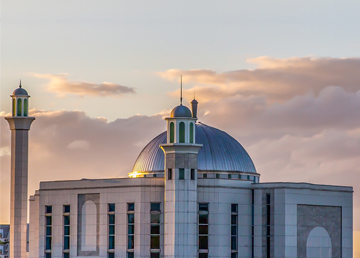 This beautifully modern designed mosque is known as one of the largest mosques in Western Europe. After being completed in 2003 costing approximately, £15 million donated entirely from the British Ahmadi Muslims, the religious temple accommodates to nearly 13,000 people.

Situated on London Road in Morden, the Baitul Futuh Mosque is more than just a home for prayers, but it is also for community gatherings. The mosque welcomes everyone to visit the quarters as the magnificent and picturesque interior and exterior design is one to be seen.

The mosque is close to Morden South station and is open 24 hours a day.  If you are interested in visiting the peaceful and holy grounds, please see the address below to plan your route.