The RBI continued its recent streak of shocking markets by not just cutting interest rates, but explicitly shifting its stance to ‘neutral’ from ‘accommodative’. The change in stance after two years reduces the possibility of any near-term reduction in rates, although the Governor in the press conference hinted that a ‘neutral’ stance gives MPC the flexibility to move in either direction. Chance of a 25 bps cut in the April policy is very low and a meaningful drop in core inflation will be required for rate cuts beyond April. The rate pause was voted for unanimously by all 6 members of the Monetary Policy Committee (MPC).

What exactly led to a shift to ‘neutral’ stance? The commitment to a durable 4% CPI seems to have strengthened in this policy, ostensibly due to still elevated inflation expectations and sticky core inflation. RBI’s own forecasts indicate CPI to be 4.5-5% in H2-FY 2018, indicating an unfinished task of reaching 4% goal. The stickiness in core inflation was cited as a concern and is likely to put a floor on headline inflation going ahead. Also, RBI seemed to be concerned about recent global developments including higher commodities, stronger dollar, rising global yields and geo-political uncertainty.

The neutral stance has been reaffirmed with the assessment being that surplus liquidity will decline with progressive remonetisation. Nevertheless, the current abundant liquidity with banks is expected to persist in the early months of FY 2018.

From an assessed level of 6.9% in current year, the RBI expects GVA growth to recover sharply in the next year. The reasons include bounce back in discretionary consumer demand, rapid restoration of activity in cash intensive sectors, recent decline in lending rates spurring demand and impetus from union budget. Given these, GVA is projected to be 7.4% for next year; with risks evenly balanced.

Pace of earnings downgrades slows down

While the earnings downgrade in FY17 & FY18 have continued, it is occurring at a slower pace than last fiscal year. Earnings cuts have been relatively benign so far, with ~10% cut by consensus for Nifty 50 Index since start of the current fiscal vs. about 21% same period last year. Overall, there have been downward revisions to consensus earnings since demonetization (albeit a lower pace).

While Nifty 50 Index consensus earnings (Bloomberg) growth for FY 2018 and FY 2019 expected to be around 21% and 18% respectively, there remains limited margin of safety with markets trading near to average + 1 standard deviation valuations, we believe earnings downgrades can pose a risk in the near term. Also, projected earnings recovery is largely due to sector-specific factors (like low base in state owned banks and higher realisations for commodity sectors) and is not based on expectations of a demand recovery. In fact, there may be downside risks to earnings if domestic demand conditions were to stay subdued and rising raw material cost may impact margins adversely for several sectors, barring commodities. 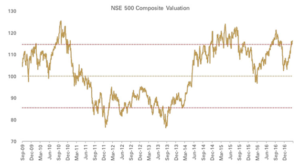 Given favorable macro, Indian equities offer reasonable opportunity from a medium term perspective. Valuations for broader markets are once again at above average levels (factoring most of the near term positives) but can continue to trade at premium (providing some more upside) unless hit by any adverse trigger

Checkout various Investment options for NRIs to invest in India

The contents of this website are meant merely for informational purpose. This content is not an offer, invitation or solicitation of any kind to buy or sell any security and is not intended to create any rights or obligations. Nothing on this website is intended to constitute legal, tax, securities or investment advice, or opinion regarding the appropriateness of any investment, or a solicitation for any product or service. ICICI Bank, Affiliates of ICICI Bank their respective officers, directors, personnel, representatives, consultants, nominees, designees do not accept any responsibility for any errors whether caused by negligence or otherwise to any person, for any direct or indirect loss / claim/ damage arising out of or in relation to the event or the use of information communicated herein. ICICI Bank makes no representations or warranties of any kind, express or implied, about the completeness, accuracy, reliability with respect to the content provided by content partners for any purpose. Any reliance placed on such information is therefore strictly at one’s own risk.