Global market indices have scaled an all-time high given the ongoing improvement in global and EM growth. Global growth, which in 2016 was the weakest since the global financial crisis at 3.2%, is projected to rise to 3.6% in 2017 and to 3.7% in 2018 (as per IMF projection). Investors have navigated into risk assets since the start of the year leading to appreciation of EM currency and outperformance of EM with respect to DM equities. India too has participated in this rally and has
performed in line with other EM markets.

We remain cautious with respect to streets estimates of +25% earnings growth for FY2019 earnings given little evidence of a strong turnaround in the demand conditions, which can drive volume growth coupled with high margin and profitability assumptions in several sectors that may be at risk with higher levels of commodity prices coupled with the current slowdown in industrial activity and credit growth. Also, rich valuations of the Indian market make it imperative that earnings do not disappoint, especially in light of the recent increase in crude prices and rising commodity prices leading to input cost pressures.

Improving global environment and robust domestic macro-economic conditions coupled with robust inflows may continue to provide support to equity markets in near term, but we believe earnings will hold the key to market performance in medium to long term given the limited scope of market re-rating. We continue to expect recovery in earnings to be gradual and growth to be moderate than street estimates. We maintain our strategy of staying low beta for the time being.

The bigger story in CPI print beyond headline numbers is that the momentum of core inflation accelerated further in November and has now remained elevated for a third straight month. The Core CPI (CPI ex Food and Transport) has printed highest since August 2014, after being stable for 36 months and then rising for last 3 months. This is partly exacerbated by Housing Inflation, given the increase in HRA allowance following 7th Pay Commission. While the HRA momentum may moderate on YoY basis going forward, inflation is expected to continue to follow the RBI projection – averaging 4.7% in Q4 FY2018. 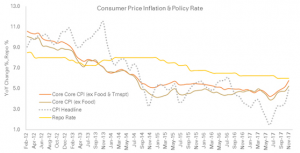 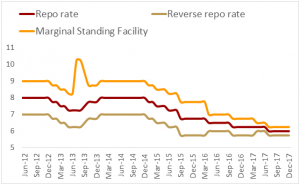 Checkout various Investment options for NRIs to invest in India

The contents of this website are meant merely for informational purpose. This content is not an offer, invitation or solicitation of any kind to buy or sell any security and is not intended to create any rights or obligations. Nothing on this website is intended to constitute legal, tax, securities or investment advice, or opinion regarding the appropriateness of any investment, or a solicitation for any product or service. ICICI Bank, Affiliates of ICICI Bank their respective officers, directors, personnel, representatives, consultants, nominees, designees do not accept any responsibility for any errors whether caused by negligence or otherwise to any person, for any direct or indirect loss / claim/ damage arising out of or in relation to the event or the use of information communicated herein. ICICI Bank makes no representations or warranties of any kind, express or implied, about the completeness, accuracy, reliability with respect to the content provided by content partners for any purpose. Any reliance placed on such information is therefore strictly at one’s own risk.